2018 has been another banner year in the progression of Precision Medicine! Year over year, there has been a dramatic rise in the number of scientific studies and initiatives that resulted in meaningful published findings, and 2018 was another record-breaker. To demonstrate trends in genetics and genomics research seen through the lens of scientific publications, the team mined genomics data aggregated in our Mastermind Genomic Search Engine to reflect on these trends.

The Mastermind Genomic Search Engine has indexed the full text of millions of genomic articles and supplemental data to provide immediate insight into the published research for every disease, gene, and mutation found in the literature. Mastermind is used by hundreds of diagnostic labs around the world to accelerate genomic interpretation and by pharmaceutical companies in drug discovery for its comprehensive genomic landscape of every disease.

Aggregating the granular genomics data allowed us to see the bigger-picture patterns that emerged.

Prevalent on this list are variants that drive multiple resistance mechanisms to tyrosine kinase inhibitors: BTK p.C481F, p.C481R, p.C481Y and p.L528W in addition to CCND1 p.E36K that inhibit Ibrutinib; EGFR p. L792H and p.L789I shown to inhibit Osimertinib and Rociletinib, respectively; and resistance variants in ABL1, ALK, ERBB2, NTRK3 and ROS among others (see Table 1).

Highlighting a novel variant of interest discovered in 2018:

Highlighting some variants of interest:


Table 2. A sample of the emergent variants (newly discovered from 2016 onward) in 2018 not associated with cancer. Hyperlinks within citation count show publications for each variant in Mastermind.

A Widening Range of Diseases and Genes of Interest

Taking a step back and looking more broadly at the gene- and disease-level of the newly emergent variants in aggregate, the pattern of emerging research interests as a whole underscored the trends illustrated above: cancer-associated genes for which resistance mechanisms have been identified and genes and diseases associated with rare genetic syndromes dominated the list.

The Top 20 Genes (see Figure 1) and Top 20 Diseases (see Figure 2) most frequently associated with the 300 most emergent variants as published in the 2018 literature were identified in a total of 241 unique genes and 2,228 distinct articles or, on average, 6 to 7 articles per variant. Interestingly…

This result further illustrates the trend towards an increase in rare disease studies focusing on genomic research. 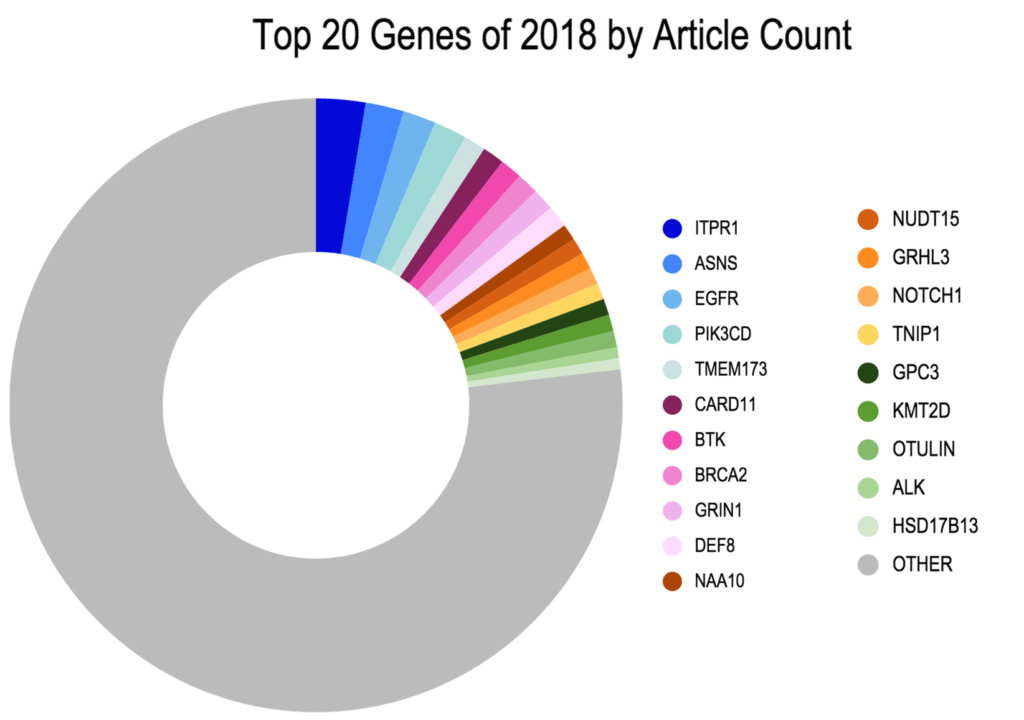 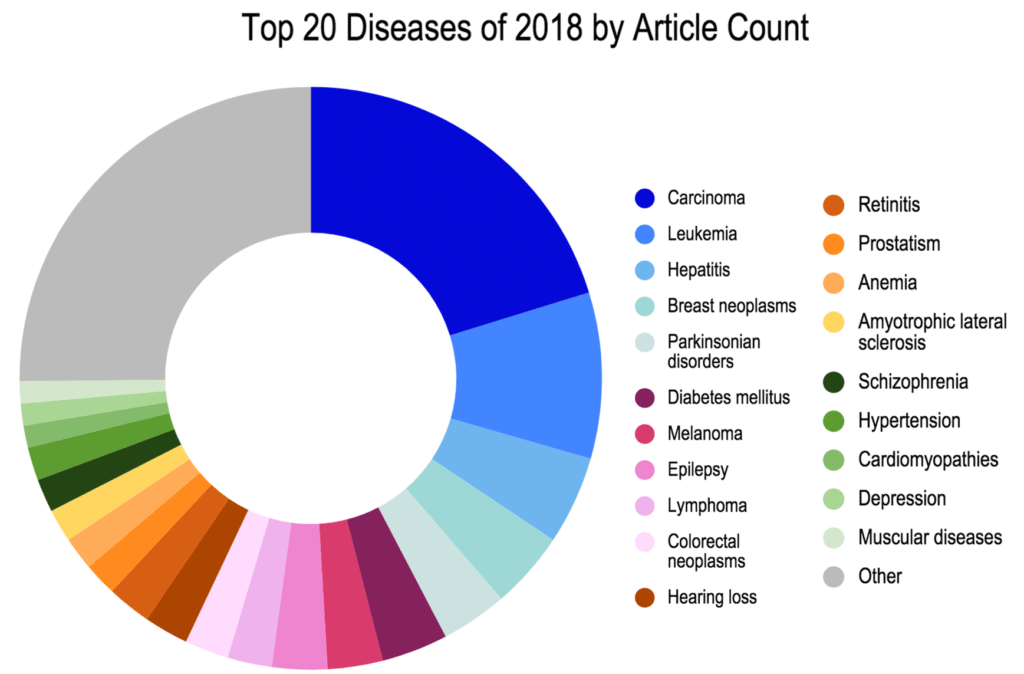 Saturation of 2017-2018 Most-Cited Variants in the Genetic Literature

The 2017 study illustrated the nature of the disease-variant landscape by identifying the top 10,000 most widely mentioned clinically significant variants and mapping them over time by publication date. The Top 10 Cited Variants in 2017 were found to be BRAF p.V600E, EGFR p.T790M, JAK2 p.V617F, HFE p.C282Y, EGFR p.L858R, KRAS p.G12D, CFTR p.F508del, KRAS p.G12V, BDNF p.V66M, and SNCA p.A53T (ordered based on most widely mentioned to least mentioned).

Revisiting these data in 2018, all of the previously top cited variants experienced a decrease in the number of publications in 2018, with some variants having already experienced a decrease from 2016 to 2017 (see Figure 3 for more details). This surprising trend suggests that these widely published variants may be reaching a saturation point in the genetic literature. In other words, the variants are well-studied enough that publication rates have begun to decline while other newly discovered variants for a more diverse collection of genes and diseases are getting more attention. 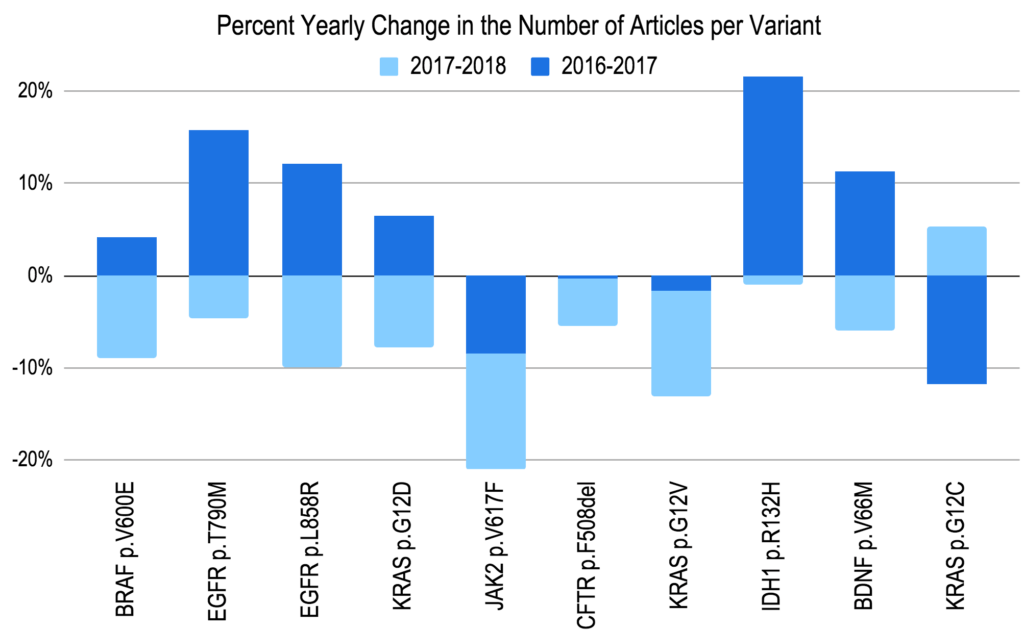 By utilizing the Mastermind database, an increasingly diverse array of newly emergent variants has been discovered and described in the scientific literature.

This data showcases a shift of focus away from previously well-characterized variants that have been known for many years, and from a singular focus on cancer towards the inclusion of an increasingly broad array of variants in many more types of genes and a greater number of constitutional diseases, including rare genetic disorders.

As such, the newly emergent cancer-associated variants tend to be associated with resistance mechanisms. This insight highlights the likelihood that they are newly appearing in nature as opposed to being newly discovered (as would be expected of the variants associated with constitutional diseases, for which the absence of treatment pressures does not lead to disease evolution in the form of new genetic variation). Discovering and characterizing these drug resistance mechanisms in cancer will likely remain a prominent component of genomic research for the foreseeable future.

The analysis, as performed within this review allowed us to uncover interesting epidemiological patterns as they emerge. It will be interesting to see how these trends expand and evolve in future years.

For clinical practice, the recognition of these new resistance mechanisms in cancer and newly discovered disease-causing variants in rare disease will surely inform patient care, and highlights the need for practitioners to stay abreast of the literature much more faithfully than in years past.

Overall, the data presented here suggests that the diversifying landscape of genetic research foreshadows a substantial increase in the development of personalized medicine for rare diseases and drug resistance in the coming years.

Get a printable copy of this report

Read our next report: Fusion Genes of Clinical Significance in 2019

The content as presented in this article is a current variant, gene, and disease trends analysis as of January 2019, and provided by Genomenon team members Nathan Adams, Lauren Chunn, Mark Kiel, and Diane Nefcy. This study was also published in EnlightenBio in collaboration with Brigitte Ganter.

Mastermind, Genomenon’s Genomic Search Engine, provides immediate insight into the published genomic research for every disease, gene, and genetic variant found in the literature. Used by hundreds of diagnostic labs around the world, Mastermind accelerates genomic interpretation by providing unique insight into genomic relationships found in the full text of millions of scientific articles. Pharmaceutical researchers license the Mastermind database for a comprehensive genomic landscape associated with any given disease – to identify and prioritize genomic biomarkers for drug discovery and clinical trial targets. Mastermind Alerts provides automatic notifications of new articles citing requested genes, variants, and diseases on a weekly basis.